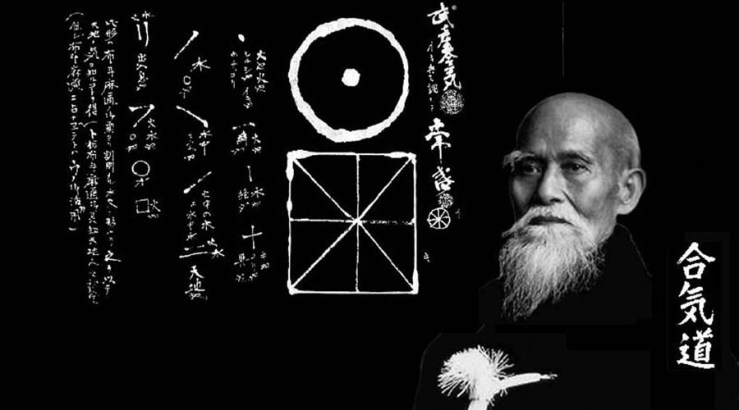 The practice of Aikido, regardless of the pedagogy that one follows or the “style” practiced, requires deep and constant application that may lead to obtaining certain technical skills, especially if one has the necessary qualities and enough talent. Unfortunately, many believe that in order to be good Aikidoka, it is not necessary a theoretical, spiritual, symbolic, cosmological knowledge of the Art

This belief is also facilitated by the ideology that is dominant in the world in which we live, a world that increasingly drives human beings towards the more pragmatic, materialistic and utilitarian aspects of living, directed only to the outward appearance of things. In order to understand how far this is from Aikido we should remember that O Sensei felt an ecstatic amazement at the harmony of the laws of nature and at the same time a humble admiration for this infinite and higher essence, the manifestation of the Divine.

A human being is part of a whole, the universe, and he is a part limited in time and space. We live in a sort of prison and our task is to get rid of it, widening our compassion in concentric circles to embrace all living creatures and the whole of nature in its infinite beauty. The attitude of the “initiated” practitioner before the mystery of the universe must be that of the mystic, that is one who – in silence – was initiated into the mysteries of the Art. Mysticism is the possibility, for a human being, to gain access to an awareness and an awakening that are beyond the technique, beyond words, beyond rationality, and therefore to work at a metaphysical level.

Aikido is steeped in mysticism and symbols, and it is these that provide access to upper levels of awareness and understanding. A key feature of mysticism is, as Einstein said, the need for knowledge, the desire to grasp or let themselves be grasped by the mystery of the Universe, and also curiosity, awe and a sense of wonder. He who wishes to penetrate the secrets and the wonderful potential of Aikido must strive to understand the mystery of the universe, trying to understand its laws through rationality, with assiduous practice, sacrifice, determination and absolute will, and also thanks  to speculation on its symbols, but at the same time must strive to purify his/her subjectivity, trying to get into an intuitive resonance with the laws that govern nature and the universe.

A human being has two ways to live: one outward, the other inward. With the interior he looks at what is not manifested, with the exterior he sees and approaches what is manifest. Aikido gives us the tools to integrate and make vibrate in unison these two ways of living. Aikido can be the gateway between what in the world is already manifest and what is not. At a very high level, practical techniques become formal, symbolic: a form of ecstasy or the point of contact with what is non-manifest. Let’s not forget that the Founder spoke of  Inori Budo, indicating by these terms that Aikido is like a prayer in motion.

Aikido should be for those who are not content just to practice techniques, but who aspire to enter the wonderful world of this Art, where the study of spiritual symbolism, esoterism and Spiritual Alchemy become tools and paths that are essential to achieve a higher level of knowledge.

Are you wondering which was the philosophical vision of O Sensei? What is the purpose of Aikido? Why is it that the Founder used the three forms of the sacred square, triangle and circle to build and practice his “Divine Techniques”? Why did O Sensei indicate the development path of the Aikido student with a pyramid? Why many of the movements of Aikido are expressed with the symbol of the Infinite?

We will try to answer these questions and many more. A path of the martial kind, if lived in a certain way, it is an complex initiation path that definitely goes beyond the mere of deconstruction the Ego for which it was undertaken.

Read Article in Your Language